An Evening with Brian Blessed

More musings about my fab new job at the theatre. This was from back in September...

It was a pleasure having the cast of Handbagged around over the last few weeks of September. In the final week of the production and it was been getting great reviews – not only from people who’ve been in to see it and told us – but also from the press. I’ve had customers on the phone who say that they’ve rung up for tickets because The Guardian review was so great. Plus, another who came in to get more tickets – so he could see it again himself and bring his mother-in-law this time!
It will be sad to see the massive gold crown over the stage disappear. – but No Man’s Land by Harold Pinter starts on October 1st.


Things are really hotting up in the box office as more and more schools are calling trying to get their pupils and staff into The Prince and the Pauper – our Christmas production. It’s a great deal and for every 10 kids they get to bring a teacher for free! I know just from reading previous blogs on the theatre website that so many people working in our theatre were inspired to do so by being brought to a theatre production when they were at school. It is such a magical place to bring them.


I was so lucky to be able to see An Evening with Brian Blessed  -as it was completely sold out. I managed to get a ticket when a few more were released. He was only doing 10 live shows this year. Kudos to our producer Martin, who managed to get him to come here! 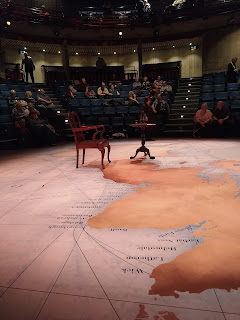 He absolutely loved our theatre in the round! When he first came on stage, he prowled around it, in his pyjama bottoms and tweed jacket, marvelling at how it was like “Greek theatre” and saying how much his friend Kenneth Branagh would love it. He had a chair in the middle of the stage and he was constantly moving it around so that he could address the whole audience.


What stories he had to tell! He veered between tales of classic actors such as Katharine Hepburn and Sir John Gielgud, to current ones such as Kenneth Branagh. He says that he and Ken have a father/son relationship – except that he’s the son and Ken is the father! His hilarious first ever voiceover – who remembers Cyril Lord Carpets - and how they went bust the week after!


He also told us of his expeditions to Mount Everest and the North Pole and was proud of the fact that at 83 years old he’s just qualified as an astronaut after training in Russia and with NASA. His memory was amazing as he recited whole scenes from some of his films, the moving poem he read to a dying Patrick Moore and even treated us to a rerun of his turn on Stars in their Eyes as Pavarotti. 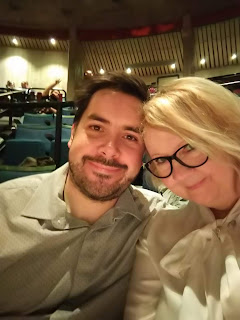 Oh yes – and guess what music he came on to? Of course – the theme from Flash Gordon! What a legend.
Posted by Bunnery at 10:44 am